How to become a 3-time Comrades champ! 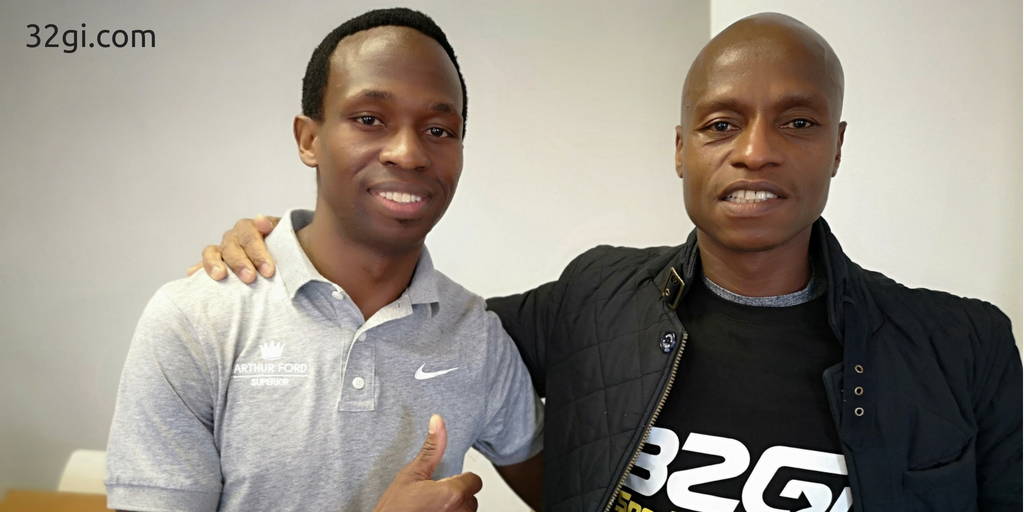 Just over a month after the 2018 Comrades Marathon many runners are starting to get on the road again in preparation for next years’ race. On this episode of the 32Gi Sports Nutrition podcast we chat to the now three-time Comrades Marathon champ, Bongmusa Mthembu.

David Katz: Welcome to our first edition of 32Gi Sports Nutrition since the 2018 Comrades Marathon and it’s fantastic to have another race winner in our camp. A man who has gone on to do the repeat, he’s done the double, he’s won the race three times, unprecedented, he is a legend of the Comrades Marathon. Of course it’s South Africa’s Bongmusa Mthembu. Bongmusa, you must still be in shock. To win it once, to win it twice, to then win it three times, and to do a Comrades back-to-back is an achievement very few have done.

Bongmusa Mthembu: Thank you, thank you so much for having me. It’s such an amazing achievement in my career. Honestly, I didn’t expect it, but I was quite confident that I would do well. Talk about winning, I think the experience came and also our plan and the confidence between me and my management team. Once we had that thing, I think that’s where we won the race.

Other than that, it hasn’t set in yet because each and every time I just think about it. I’ve always asked myself how did I do it, but I think the experience at the end of the day. The respect of the hard work that I put in, I think it’s paid off, so that’s why I am so happy that our plan worked so very well.

DK: Bongmusa tell me about that finish. By all accounts that addition of Moses Mabhida and the slight change to the finish was well received, but difficult for you guys as athletes because you weren’t quite aware of what it was going to be like. In that run in, it was quite flat to the stadium or straight to the point that potentially the guy behind you could keep an eye on you.

BM: Definitely, that’s for sure but that’s what I said even before the race. It will be nice, it will encourage us as athletes so that we can chase a better time if we could run a certain time, it could be better. Can you imagine passing the Kingsmead Stadium, way below the course record?

Other than that, since it’s been announced that the finish is going to be at Moses Mabhida Stadium, we had to change our plans. We had to change the way we’re going to train just because there will be that additional. I mean that’s the thing we do. We love running. We’re not doing for anything, but I think it comes from our hearts. We have a passion of course. Although we had that, especially when I passed Moses Mabhida Stadium, that flat, it’s a long way but I had to be very strong, I had to be very composed. I think that’s what I’ve done very well.

DK: Talking about being strong, talking about being composed, yes, only one person can win it, but it is in a sense a team sport, and it’s not necessarily that you have people pacing you but personally, Arthur Ford, you’re not the biggest team out there, you don’t have that massive support that you have at Nedbank that some of the guys at KPMG do. You guys seem to just gel together as a team, and that small support structure and that great support you get from Arthur Ford really helps you excel doesn’t it?

BM: Definitely, that’s very true. We are not a big club, we don’t have so much sponsorship but that sponsorship we had, talk about 32Gi, these guys have been with us so many years. They’ve been loyal to us and that’s what’s kept us together.

The communication between us, we are the brothers, we are the friends, but when we train, it’s like we know that we have to work, we have to put a lot of work. I think that’s why so many people are able to recognise us because we’re working together as a team. Yes, today you’re speaking with Bongmusa, but there are so many people behind the team, that makes me who I am today.

I mean that’s Bongmusa who won Comrades, without them I’m less than nothing. That’s why I always appreciate all those people who are supporting Bongmusa, all those people who are players for me when I’m doing my long runs, when I’m doing my training, including our team manager and also our coach. These guys they’re working so hard to be with us. It’s such an amazing achievement, especially so with the guys from here in KwaZulu Natal.

How nutritional support makes such a difference

DK: Bongmusa tell me now as well, Mark Wolff, great to have him there again pre-race, during the race for advice. How much assistance is that, yes you’ve got your plan, you’ve done that before but to have that assistance, maybe you’re struggling with something, you’re feeling a little bit of an energy dip, getting that advice, does it help a lot on race day?

BM: Definitely. What we had our plan with our coaches, we sat together and said the most important thing is to have the communication at heart, in between us. With the coaches standing on the road, I will see his face that what does it mean? Whether he doesn’t say anything, that’s the communication, that’s a very key communication.

Remember that a couple of months ago I was with John and also those guys, Gift Kelehe, I’ve seen the way they train. When I came back there I told my coach that I’ve trained more than Gift, more than those guys. What these guys, make them beat us, is just because of John. These guys want, once they see John, everything changes to them.

The importance of race-day support

That’s very important when you run Comrades, because I mean no one can tell you that he will run Comrades consistently. I’m talking about 3:15 per km from start to finish, but somewhere, somehow you will see the team. If there is somebody to go and keep pushing you, you will be able to make it.

DK: Bongmusa, look, it’s Comrades, it’s been a part of your life, what you’re about, but you’ve now won back-to-back, you’ve won three in total. Does that change in the next year? Are you going to be as hungry as ever?

BM: Definitely, I think next year is going to be, you will see a very different Bongmusa. I’ve got six or seven year plan with my coach, so this is the second year, as I’ve started that year winning Comrades. This is our second year, so we still have five or six years left, so hopefully within these six years our plan will keep on working on ourselves. That’s what we planned for.

Bongmusa keeping his eye on Bruce

DK: That’s a scary prospect for all the other runners out there, considering you’re only two years into a seven year plan Bongmusa.

DK: I think Bruce Fordyce also might be a little bit worried about his record!

DK: Bongmusa, fantastic job again, so much support for you and part of the reason is you’re not just a great champion; you’re a great person, very humble. Thanks very much for chatting to us again here on the podcast, and we will definitely be speaking more in the build-up to the next edition.

BM: Thank so you much, thank you, I really appreciate it.