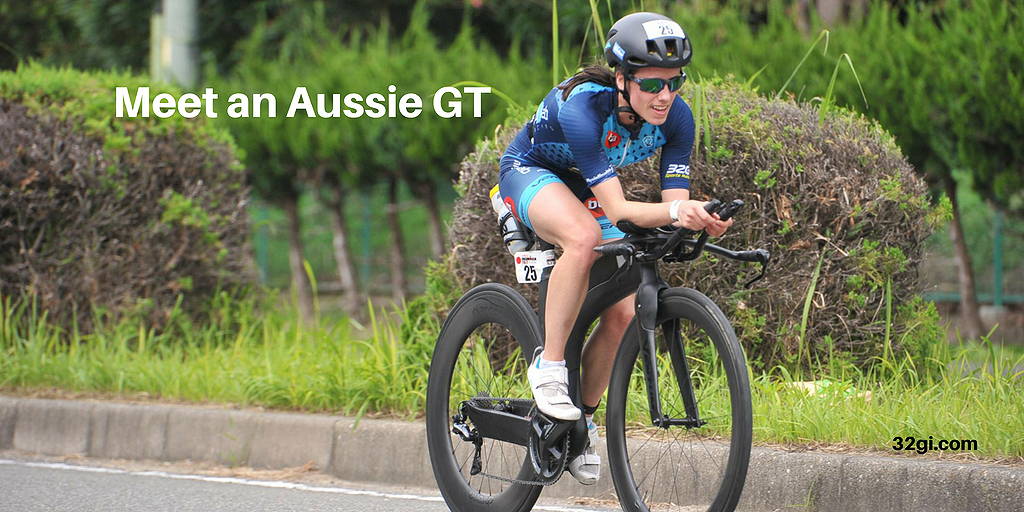 This week on 32Gi Sports Nutrition we chat to an inspirational athlete out of Melbourne, Australia. Grace Thek may only be 26-years-old, but she is an ultra-triathlete on the rise, having won and been on the podium in her opening three half Ironman distance events. Thek is a name worth remembering.

Thanks for joining myself, Mr Active, David Katz on 32Gi Sports Nutrition. On the back of having spoken to our Comrades Marathon champion for 2018, ironically 2017 as well and 2014, a three time Comrades champion, of course Bongmusa Mthembu, I’ll put a link up if you want to hear that.

We thought let’s get behind some inspirational athletes and there are plenty out there and plenty that are using 32Gi products. It’s a great pleasure to welcome onto the podcast Grace Thek from Australia, only 26. I say ‘only 26’ because she’s already doing ultra-triathlons. Grace, just talk to us about how you got started, I believe you have a running background. But often people start, they start on a shorter distance but you’ve already stepped up to the 70.3 distance and have been very competitive.

Foundation built on a running background

Grace Thek: Thanks for having me on the show; it’s good to be here. As you said, I do come from a running background, I started running at a young age and qualified for World Juniors when I was 18. Then went over to America where I studied and ran for Providence College for four years. My journey with triathlon really only started when I came back from America, which was at the end of 2014.

I’ve been in triathlon for about four seasons now, and the first couple I predominantly did the sprint distance and a few Olympic distances, but my goal for this year was to do my first 70.3 race. I loved the distance, so that’s going to be my goal for this year, just working towards longer races and seeing where I can go with that distance.

DK: Grace, it’s been a phenomenal rise, having stepped up to the 70.3 or ultra-triathlon distance. You only got your professional license at the end of last year, you’ve already raced a few races, and your debut in Geelong, just tell us about that, what a phenomenal attempt at your first 70.3 distance triathlon.

GT: Yes, it certainly was an unforgettable first 70.3. I guess my goals going into the race, having not raced that distance before was to finish, was number one, two was to make lots of mistakes that I could learn from going forward and three was just to have fun.

I guess talking through the race; I had a good day out there. I came out of the swim with some other girls, on the bike I maintained 2nd or 3rd position, and then when it came to the run I got off the bike six minutes down from the first place, and managed to run her down.

Unfortunately there’s a few videos online of me coming through the last 100m or so, even 50m of the race and I tried to sprint and my legs just seized up, they just wouldn’t let me go any further. I actually collapsed a few times in the finishing chute and the girl that I had passed, passed me back, so I ended up with a 2nd, but I was extremely happy with that. As I said, it was my first race, so it was great to be on the podium.

DK: Grace, we’ll grab those videos from you, put a few links up if people want to see Grace as well. I mean literally her debut race at that distance, phenomenal performance. You then went and raced Challenge Melbourne, same distance, the half challenge. Geelong, Melbourne, you’re a Melbourne girl, both races there, and then you go off to Japan and you absolutely smash it, tell us about that experience.

How to get that winning feeling

GT: Thanks! I guess Japan was my first race overseas and so I didn’t really know what to expect, but just went in there with a good training base behind me. The two previous races, Challenge Melbourne, as you mentioned and Geelong. That put me in good stead. The race there was quite different, it was technical on the bike and quite challenging and I came away with a win from that. So I was extremely happy with that and it was a great first overseas race for me.

DK: Grade, like many, we say professional athletes, but a lot of professional athletes, depending on the sport of choice are still forced to work. You’re a qualified physiotherapist, how much time do you get to practice, does that help your ability to train and surely the experience and the knowledge that comes with studying something like physiotherapy, can only aid the way that you understand your body. Are able to utilise your body to its maximum potential?

GT: I graduated from the University of Melbourne with a physio degree late last year. I’ve actually only kind of gotten in to work the last couple of months. At this stage I’m only doing it part time so that I can focus on my running at this stage. Definitely I think having that background really helps with understanding my body. I’m quite in tune with my own body from previous injuries I’ve had.

Sometimes it’s great to have the knowledge, but other times you kind of want to be a little bit ignorant about what’s happening or you’re in a bit of denial that perhaps you’re getting injured. It definitely helps, maybe sometimes.

DK: Grace, you made me chuckle there, that’s a very good point. You think of all the benefits, but what comes with that is, as you said, that knowledge and any athlete, be it a runner, a triathlete, I know you come from a running base, you’re now into triathlon, you feel that little tweak and you’re like, I can push through it! I totally get what you’re saying!

How a good diet stems from the top

Talking about that, you said you went to the States, you started your studies there. Generally when people are students they don’t eat the best, finances aren’t the greatest, for someone who went as an athlete, you were already running at a decent level at that stage before your triathlon career. Diet, was that where you were introduced to eating well or were you a typical student?

GT: That’s a good question. In America they term it the ‘freshman 15’, putting on 15 pounds your first year over in college. For me I grew up eating very healthy. My parents always prepared healthy options and healthy meals so for me going over there; I kept a pretty healthy diet. There were so many options, we had access to the food courts and there were options for salads and pasta and a whole variety of different things. I think while I was over there it didn’t really change a whole lot from how I was eating before I left and how I eat now.

DK: I’m glad to hear that, the Americans didn’t win you over with your dietary, I want to say requirements, but ‘taste’ is probably a better word. Talk to me now, as a triathlete, they eat like horses.

The art to fuelling as an ultra-triathlete

You need so many nutrients to fuel the training of three different disciplines, of course racing is technical and very tricky, you’ve got to practice, it’s a complete science. You’re a 32Gi athlete, how do you incorporate supplements into your training and racing?

GT: Certainly, I’ve noticed a huge increase in the amount of food that I need to consume, especially in the last six months since I finished physio and really lifted up the training. I guess with 32Gi they’ve really supported me, providing me extra nutrition on top of my current diet.

Particularly during a race situation, the gels, the bars, Hydrate, that all comes into play to allow me to perform at my best. In terms of other supplements, I use protein powder after hard training and hard races, just to get that protein and carbohydrates back into my system.

DK: Grace, you really are an inspirational athlete, as I mentioned earlier, it’s really hard to believe you’re only 26. You’ve got a race coming up very soon, on the 5th of August, it’s another 70.3, the Asia Pacific Championships. You must be a little bit nervous for that, talk to us about that, what are you hoping for?

How to manage your racing

But then I also want you as a last things, this happens with a lot of endurance athletes and maybe more so with triathletes, but people tend to race too much, and then you run the risk of overtraining but then it has a knock-on or over-racing effect.

70.3 maybe not as much as maybe looking at the full Ironman, but could have the same impact. Is that something that is in the back of your mind and as you step up to the full distance, is it something you’ll look to, to restrict the amount of times you race a year?

GT: Yes, as you said, my next race is only about a week and a half away in Cebu, Philippines and that’s the Asia Pacific Championship, it’s also a half Ironman. Going into it, I guess, I don’t put too much pressure on myself, it’s mainly just to get out there and do my best on the day.

I think it will be quite hard with the humidity and the heat racing in the Philippines, I haven’t done that before. So it’ll be interesting to see how I go in those conditions. In terms of how I feel I’m going to go, I think that a top five performance would be amazing. But as I said, I’m just out there to have fun, see how I go and build on top of that for future races.

In terms of over-use and overdoing it, definitely plays a big part in my mind. I’ve had some injuries in the past, so for me it’s very much; my schedule was around not racing too much in this first year. I’ve got two other races after Philippines, at this stage I think that will be enough racing for one year.

At this stage I’m not sure whether I’m going to progress to a full Ironman just so soon, maybe in five years’ time, but at this stage my goal is to focus on the half Ironman. I guess making sure that my schedule, I have enough break in between each race, leaving probably at least six weeks up to maybe two months between races. Just so I don’t get injured and overdo it.